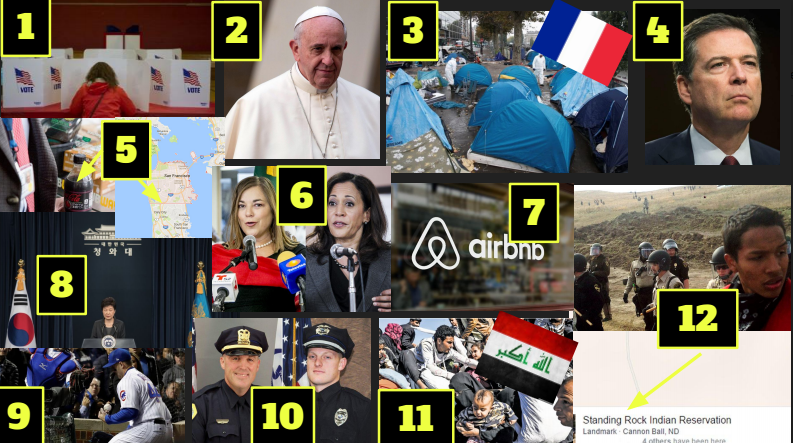 1. Voting for the next president of the US for next Tuesday.
2. Pope Francis opposes women becoming priests at this time in Sweden.
3. Migrants in France are being cleared to stop them from entering Britain.
4. James Comey's agency revealed that they were looking over Hilary Clinton emails.
5. USF banned sugary soda drinks.
6. Candidate US senate Kamila Harris or Loretta Sanchez are going to replace one of our current senates.
7. Airbnb avoided a class-section lawsuit for racial discrimination.
8.The South Korean President, Park Geun-hye addresses a speech towards the scandal of the abuse of power, which she takes full responsibility for. She also states that she will cooperate with any investigation.
9. The cubs finally won the world series game against Cleveland.
10. 2 Iowa police officers were killed by suspect Scott Michael Greene, he has not been claimed guilty but he is "suspected of doing this."
11. The Iraq forces fight ISIS on Mosul streets ( ISIS controls Mosul).
12.Police fire rubber bullets as pipeline protesters try to protect sacred sites.
Powered by